Few drivers have burst onto the sportscar racing scene as spectacularly as Harry Tincknell did in 2014. The then 22 year-old Tincknell took a class win at the 24 Hours of Le Mans in what was only his fourth ever sportscar race.

Tincknell cut his teeth in the competitive world of karting before moving up to formula cars where he was a multiple race winner in Formula Renault and Formula 3. On top of the 2014 Le Mans win he finished as runner-up in the 2014 European Le Mans Series with the JOTA team and was awarded the Rookie of the Year title.

He remained with JOTA in 2015, where he finished third in the European Le Mans Series, taking two pole positions, a win and four podiums along the way. The team went all the way to the top in 2016, taking the championship victory. In 2015 Tincknell became a factory driver for the first time when he was signed up to race the Nissan LMP1 car. The programme was ultimately doomed but Tincknell shone as the fastest of all the Nissan drivers at Le Mans.

When the Ford GT race programme began in 2016, Multimatic signed him up, originally as a third driver for Le Mans but impossible to let go when his talent for winning races became apparent. He stayed in the #67 Ford GT until the end of the programme in 2019, taking many victories along the way, including a hard-fought second place at Le Mans in 2017.

In 2018, Multimatic placed Tincknell in the #55 Mazda DPi to race in the IMSA Weathertech SportsCar Championship. The fast and mistake-free racer has gone on to take multiple wins in the Mazda, including an outright victory at the 2020 Sebring 12 Hour race. His second Le Mans win – this time for Multimatic partner, Aston Martin – came in 2020, and showed that this racer has no plans to slow down for a long time yet. 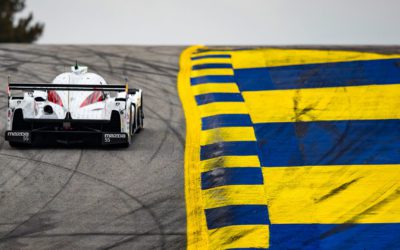