The IMSA WeatherTech SportsCar Championship is the premier series for sportscar racing in the US, open to both prototype sports cars and Grand Touring (GT) cars. The series boasts many showcase events, including the Rolex 24 at Daytona, the Mobil 1 Twelve Hours of Sebring and the Motul Petit Le Mans. With a good combination of endurance and sprint events, the series attracts top car manufacturers and many of the world’s top racing drivers and provides spectacular entertainment for race fans.

Multimatic Motorsports built and campaigned the Mazda RT24-P in the IMSA WeatherTech SportsCar Championship, competing in the top class, Daytona Prototype international (DPi), until the close of the 2021 season.

Roar before the Rolex 24 presented by INX

Sahlen’s Six Hours of The Glen 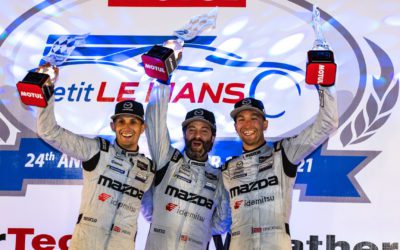 Multimatic Motorsports’ bruising Californian tour finished up with a fifth place at Long Beach to add to the identical placing at Laguna Seca.  Despite a number of setbacks the team never stopped digging and as a result, has hung-on to third in the teams’ and...